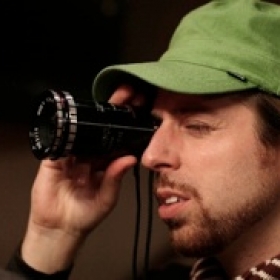 Ross Evison went through the usual hokum of growing up in England before becoming a writer, editor and ultimately a director specializing in dark comedy.

He has been editing in the film advertising/marketing arena for more than 12 years, creating award-winning trailers, promos and TV campaigns for major blockbusters and independent features around the globe.

In 2008, he established Dark Soup Films as a backbone for his directing work. He came up with the name while eating soup in a dimly lit cinema one night. Unaware of how it occurred, he recalls leaving the cinema with a burnt tongue and a vision of the future.  Through his writing and directing, Evison has since then shown a great flare for dark humor.

His work always features strong performances and beautifully crafted visuals as well as a honed sense of cinematic grammar and story structure.

Aside from directing numerous shorts and commercials, Evison has written three feature scripts, worked as an editor on two and is poised to direct a feature of his own.

Evison’s recognitions include the Award of Excellence at the 2012 LA Movie Awards for  "Stepping Into The Fire," a documentary feature Directed by Evison and Roberto Velez and a nomination for Best Screenplay at the inaugural Edgemar Short Film Festival for "Depravity", his self-penned and directed short film.