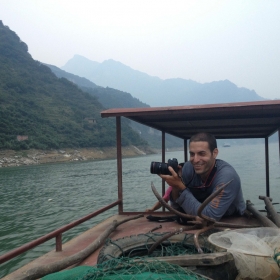 After graduating with a masters degree in Mechanical Engineering from UCLA, Sean Faden began his career at Digital Domain, designing miniatures for the features The Fifth Element and Titanic. He quickly moved into the digital world and has worked as a lead artist and VFX Supervisor on numerous feature and commercial projects for the past 17 years. As a Computer Graphics Supervisor, Sean contributed to the groundbreaking effects in Terminator: Salvation, Pirates of the Caribbean: Dead Man’s Chest, The Day After Tomorrow, XXX, and Time Machine. His VFX Supervisor credits include Let Me In, Captain America, The Girl with the Dragon Tattoo, and The Amityville Horror. He was both the VFX Supervisor and 2nd Unit Director for the feature A Nightmare on Elm Street. In the commercial world, Sean has worked as a VFX Supervisor, on-set VFX Supervisor, and 2nd Unit Director for some of the top directors in the industry, including David Fincher, Michael Mann, Mark Romanek, Noam Murro, Ron Howard, and Tom Kuntz.

While working in the commercial divisions of Asylum and Method Studios, Sean was given an opportunity to direct all-CG spots for such clients as Apple and GMC, as well as helping to design an all-CG spot for LG with director Mark Romanek. In 2012, while at Method Studios, Sean co-directed three 2 minute live-action web spots for XBOX Kinect Star Wars entitled “Duel,” “Girly Vader,” and “Xwing” mixing HD footage from the original Star Wars with live action footage to recreate classic scenes with a humorous twist.

Since joining the Pixomondo team last year, Sean has VFX Supervised work on A Good Day to Die Hard, Fast & Furious 6, and Game of Thrones: Season 3. A Good Day to Die Hard saw Sean on set in Budapest for two months helping to plan and film the movie’s climactic ending, including shooting all of the aerial photography. Sean also directed an all-CG spot for the German TV station ZDF to promote the UEFA Finals.

Sean recently directed an aerial unit in China, shooting locations all over the country for an WANDA ride film entitled “Hubei In the Air”. In 2014/2015 he directed a 4 minute stereo 4k live action and CG commercial promoting one of Franco Dragone’s Latest theatre shows for WANDA in China entitled the “Xi Show.”  This past year also saw Sean co-direct a new spot for PS4’s “Fake Mask.”