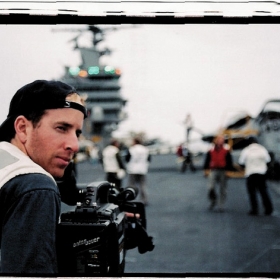 The first and only to have filmed, judged, and competed in ESPN’s X-Games, Grossman is a published author and award winning director.  He graduated from USC’s school of cinematic arts, then was selected to represent America as the short film director of the Promethus World Stunt Awards in Moscow.  After appearing in several films and commercials (including starring in Michael Bay’s Nike Superbowl spot)  he was recruited by mentor and filmmaker Rob Cohen (The Fast and the Furious/xXx/The Mummy), where he created commercial and digital content for a global audience.  He’s since directed for VANS, Red Bull, Toyota, and the recent ARCH motorcycle campaigns featuring Keanu Reeves.

Grossman has a unique understanding of both the digital social landscape, and classic cinematic filmmaking.  His dynamic visuals meld with story telling, to bring riveting imagery with heart to every project.